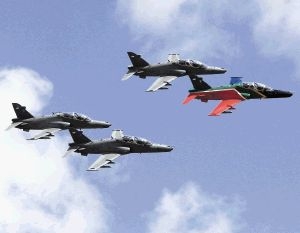 The murky details of SA's multibillion-rand arms deal are unlikely ever to come to light after weapons maker BAE Systems last week cut a deal with UK and US officials to plead guilty and pay fines on some charges in exchange for the dropping of probes on others.

Europe's biggest weapons maker pleaded guilty to gross control failures in its international operations and was slapped with a £30m fine by the British Serious Fraud Office (SFO) and an additional fine of 400m by the US justice department on Friday.

This is a first (multijurisdictional deal) and it brings a pragmatic end to a long-running and wide-ranging investigation. No further prosecutions will be brought against BAE Systems in relation to the matters that have been under investigation by the SFO, fraud office director Richard Alderman said at the weekend.

BAE Systems opted for a settlement by admitting to control failures in the way it ran its business in many parts of its operations around the world in the recent past. In the US, the company would plead guilty to one charge of conspiring to make false statements to the US government in connection with certain regulatory filings and undertakings.

However, the agreements only concern the company's 1999 deal for air-traffic control equipment in Tanzania . This means there will no longer be an investigation by British authorities into other BAE Systems contracts such as its aircraft deals with SA and the Czech Republic.

The South African deal involved the £1,6bn sale of Hawk aircraft in 2001 as part of SA's multibillion- rand arms procurement. Allegations of bribes paid to senior African National Congress figures have dogged both former president Thabo Mbeki and President Jacob Zuma . Critics of the government's behaviour over the so-called arms deal were furious.

We have been shafted by the decision to reach a plea bargain agreement and not to prosecute BAE, opposition Democratic Alliance spokesman David Maynier said yesterday. The details of the various investigations will remain hidden as a result of the plea bargain agreement and nobody ­ whether they bribed or whether they took bribes ­ will be held to account.

They are no better than any of the rogue leaders in Africa who have used funds from bribes in arms deal to stay in power, she said.

Arms deal activist Terry Crawford-Browne said the government could still cancel the rest of the contract and save about R30bn and millions more that would be incurred from future services and repairs .

The contract allowed any of the parties to cancel it if one was found guilty of corruption, according to the Prevention of Corruption Act.

Government spokesman Themba Maseko said the government would not comment at this stage.

Alderman said his office had taken account of BAE Systems implementation of substantial ethical and compliance reforms and welcomed its declared commitment to high ethical standards.

BAE Systems chairman Dick Olver said in an e-mailed statement the company very much regrets and accepts full responsibility for its past shortcomings.

It was the first time BAE had admitted publicly to a crime in its payment of undisclosed commissions to third parties as part of its international arms sales business, an unidentified US justice department official told Bloomberg.

Friday's deal also means the British fraud office would no longer investigate allegations of wrongdoing by BAE Systems in the course of its Al-Yamamah deal with Saudi Arabia. The fraud office scrapped an investigation into BAE in 2006 over bribes allegedly paid to win deals in Saudi Arabia after then-prime minister Tony Blair said charges might harm relations between the two countries, posing a threat to national security. In connection with the sale of a radar system to Tanzania in 1999, Olver said the company had �made commission payments to a marketing adviser and failed to accurately record such payments in its accounting records.

Olver said the company also failed to scrutinise these records adequately to ensure that they were reasonably accurate and permitted them to remain uncorrected.
London-listed BAE's shares closed 1,6% higher on Friday.

With acknowledgements to Hopewell Radebe and Business Day.

This has to be a saddest day for corruption fighting ever.

In the SA deals, the SFO had all the required evidence to get a host of convictions of both BAE Systems as a juristic person and a number of employees and its agents..

But it was just too sensitive as these convictions would have lead to the demise of BAE Systems.