We maybe have two years to stop the rot, or it will deteriorate to . . . just a very expensive border guard 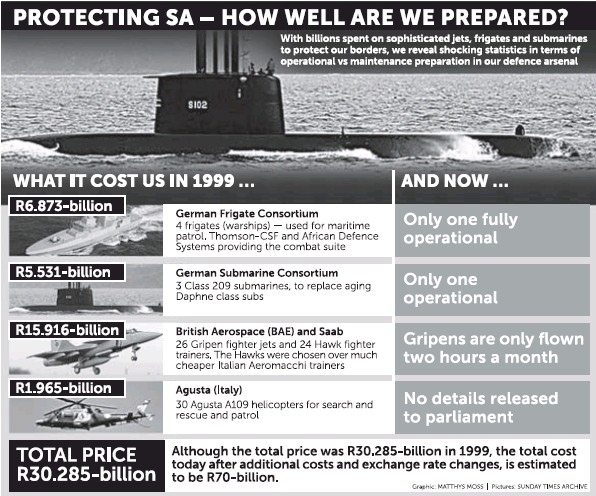 SOUTH Africa’s military forces are buckling under the strain of crippling budget and mechanical setbacks.

This despite the acquisition of high-tech fighter jets, frigates and submarines in the controversial arms deal that has cost the taxpayer an estimated R70-billion in today’s terms.

In a week where an SA Air Force (SAAF) Dakota crash claimed 11 lives in the Drakensberg, the Sunday Times established that the military has dumped a long-standing air force maintenance contract, apparently due to budgetary constraints.

The latest revelations, in a performance report submitted to parliament’s defence portfolio committee last week, include:

The 26 new Gripen fighter jets, which cost R10-billion, clocked only 173 flying hours between July 1 and September 30 this year, or an average of only two hours a month for each plane ­ while pilots need to fly at least 10 hours a week;

The navy only managed 1 373 hours at sea during this time, a fraction of the annual target of 35 000 sea hours;

Of the four new navy frigates which cost R6.9-billion, only one is operational; and,

Of the three new submarines, which cost R5.35-billion, only one is operational.

An upgrade of the military’s Oryx helicopters, the workhorse of the defence force, is also on hold due to a dispute with arms company Denel.

The quarterly assessment suggests the military’s biggest achievement is border patrol*1 and providing backup to government departments such as the police.

UN operations in the Democratic Republic of the Congo, Sudan and the Central African Republic.

Responding to committee members’ questions about revelations in the Sunday Times last month, SANDF head of strategy, Admiral Alan Green, said there was “a capacity problem” with the frigates.

“The dockyard doesn’t have the capacity to turn around these ships in what we would term a short maintenance cycle,” he said.

“Another thing we need to bear in mind is that, in the previous dispensation, when we bought vessels of that nature we would have a huge integrated logistics support system with it, which would include some main equipment like engines and the ancillary equipment. We don’t have that luxury within our budget*2.”

Green also told parliament about budget problems affecting the Gripen squadron, which flew only 173 hours during the second quarter of the year.

“These aircraft, particularly, are far more costly to operate than originally determined. That is something we are living with*4,” said Green.

Aviation experts say the Gripens will deteriorate if they are not used. There are also concerns about a shortage of pilots, who typically require about 10 flying hours a week to remain skilled.

Said one: “At the end of the day you have to strap the plane onto your back and fly it.”

Denel this week confirmed being in discussions with the air force over maintenance conducted by its subsidiary, Aero-Manpower Group.

Spokesman Sinah Phochana said: “Denel is in discussions with SAAF on the Aero-Manpower Group contract. We will issue a statement once they have been concluded.”

She confirmed “teething problems” with the maintenance, repair and overhaul of Oryx helicopters.

“The issues were dealt with and resolved. A new target date for completion has been set for October 2014.”

Defence analyst Helmoed-Romer Heitman said the military’s new hardware would be rendered useless unless more money was allocated for maintenance and operations.

“I would argue that we maybe have two years to stop the rot, otherwise it [the defence force] will deteriorate to the point where it will be just a very expensive border guard.”

He added: “We buy equipment and we don’t seem to realise that people have to practise with it.”

On the Dakota crash, he said: “In any rational situation we would not be flying a 70year-old aircraft around the place. Modern aircraft, which we should have bought 30 years ago, would have been flying above the weather and they wouldn’t have crashed. It is as simple as that.”

DA defence portfolio committee member David Maynier said the budget squeeze was partly the result of the government buying fancy equipment which cost a fortune to maintain, rather than replacing outdated equipment.

“The defence force operating budget has been stripped to the bone, resulting in significant capability gaps in the SANDF.

“If things continue like this the defence force will be turned into an armed welfare service.”

With acknowledgement to Bobby Jordan and Sunday Times.


*1Border patrol is actually the responsibility of the police, but they are so strained responding to callouts for murder, rape and robbery that they cannot do it.

But actually border patrol is easier that falling off a log.

Station a company of 100 plump troops in a comfortable location and occasionally send or a section of 10 on a few hour patrol.

Until recently the SA Army could only muster a couple of companies for border patrol and so if there's been any performance improvement is comes off a low base.

Indeed its triumphs over the last eight months include (in its own words) the following :

"During operations in protection of the rhino population 20 suspected poachers were apprehended. The following were recovered, six .375 hunting rifles with 16 rounds, one .458 hunting rifle with one round, one AK47 assault rifle, one CZ602 with 14 rounds, three axes, one saw and 4 mobile phones."

But Zuma's cunning partner in crime Thomson-CSF used all of its top cover to increase the frigate price from its cabinet approved ceiling price in 1998 of R6 001,25 billion to R6 873,00 billion in 1999 while at the same time radically "reducing the scope and quality of supply"*3.

The submarine especially came with a very healthy dollop of logistic support built into the contract.

The starlings and mynahs have truly come home to roost.

The patio is awash with avian manure of the most odoriferous variety - garlic with a dollop of escargot.


*3Not my words, but those of the DoD project officer, then-Capt Jonathan Edwin Gold Kamerman and the Armscor programme manager, Frits Nortje.

As my legal team aptly described, the Joint Project Team was over a barrel.

With Schabir Shaik circumperambulating with his handy jar of vaseline.


*4No, that is something that we are living with.

But with which we are not flying training and patrol hours.

Any rational person has by now worked out that the only rationale for buying all this stuff was :